Virtually all European producers, wholesalers and retailers are experiencing a clear impact of the corona pandemic on their supply chains. For 78 percent of them, the impact is negative in the short term, but for 17 percent it is positive. Only 5 percent say they are not affected. This is according to a survey by Supply Chain Media among 143 supply chain decision-makers in Europe. These directors and managers work in all industries that produce and trade physical goods. The respondents are responsible for the supply chains in Europe or even worldwide.

The 143 respondents completed an online survey in the last week of March, in the most hectic period for their supply chains. The short survey consisted of a series of questions about the assessments made, the bottlenecks identified, the changes in supply and demand, the actions taken and the final impact on the company. Responses from some supply chain executives showed that in the heat of the moment such a survey is very valuable to see how companies react. 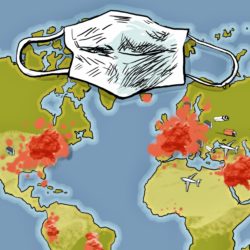 For European companies, the focus of the assessments carried out is mainly on the operational level. Of the assessments carried out, the risk analysis of their own operations (production, warehouse and transport) scored the highest with 94 percent. Of all respondents, 85 percent examined the operational risk of the incoming flow of raw materials and parts and 76 percent of the outgoing flow of product (deliveries).

On a tactical level, companies primarily looked at available capacity at strategic suppliers and different scenarios to match supply and demand, with 81 percent and 77 percent, respectively. A European supply chain director of a producer of flavourings and fragrances indicated that almost all customers had called in the demand for available stocks and production capacity. Executives with global responsibility for supply chains look more at the financial health of strategic suppliers than their peers responsible for Europe.

The most important supply chain bottlenecks in the corona crisis are inbound goods flows from suppliers, lack of visibility on customer demand and outbound shipments to customers, according to 62, 60 and 50 percent of respondents respectively. Among manufacturers of consumer goods, lack of demand visibility scored the highest with 70 percent. In business-to-business, the supply of raw materials and parts is the biggest bottleneck for three quarters of companies.

Changes in customer demand since the start of the corona crisis in China have been very variable. In 58 percent of respondents, demand shows a small to extreme decline, while 30 percent experience a small to extreme increase in demand. The extreme decreases and increases in demand are mainly seen in consumer goods. The supply side of goods shows a clear decline for most companies. At 59 percent, the supply of raw materials and components fell in numbers and volume. For just over a quarter of the respondents, this supply remained stable.

A long list of possible actions taken because of the corona crisis was presented to the respondents. Three quarters of European companies have taken health measures in warehouses to prevent the internal spread of Covid-19. The next most common action is to place additional orders with suppliers, by 63 percent of the companies. Almost 60% have accelerated the strategic planning cycle (Sales & Operations Planning) from monthly to weekly or even daily. 37 percent temporarily shut down the factory to ensure employees could work more safely, as candy manufacturer Mars did in the world’s largest chocolate factory in Veghel.

Shortening and extending the payment term scored low with 10 and 17 percent respectively. Unilever is a positive exception with the announcement to pay invoices from its small and medium sized strategic suppliers as soon as possible and also to finance small retail customers, especially in the fast growing countries.